Here are some of the more recent articles that our team has created and/or placed in a variety of publications. 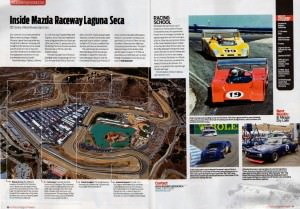 Say “corkscrew” to a car nut and they’re likely to dream up images for Mazda Raceway Laguna Seca long before any thoughts of a cabernet. And along with thoughts of the racetrack comes mental pictures of Can-Am cars or Trans Am racers like Parnelli Jones and Mark Donohue ripping down the famous 10 story drop between turn 8 and 9.

If that’s you, you’re going to dig this new series in Roddin’ at Random. We’ll take a look at some of the most popular racetracks in the U.S., and provide the facts and stories that make them famous. We’ve been lucky enough to visit and even drive on most of these racetracks.In fact, former editor, Rob Kinnan, even has a corner named after him on one of them for his demonstration of an alternate driving line.

Mazda Raceway Laguna Seca is a 2.28 mile ring of asphalt filled with 11 glorious turns. It has been featured in more racing games than just about any other track in the U.S., giving many of us the feeling that we’ve tossed a car down the Corkscrew or hit the wall in the Andretti hairpin.