Here are some of the more recent articles that our team has created and/or placed in a variety of publications.

Four Things You Need to Do Immediately After the SEMA Show!By cole Posted in  SEMA  | 10 Nov 2015 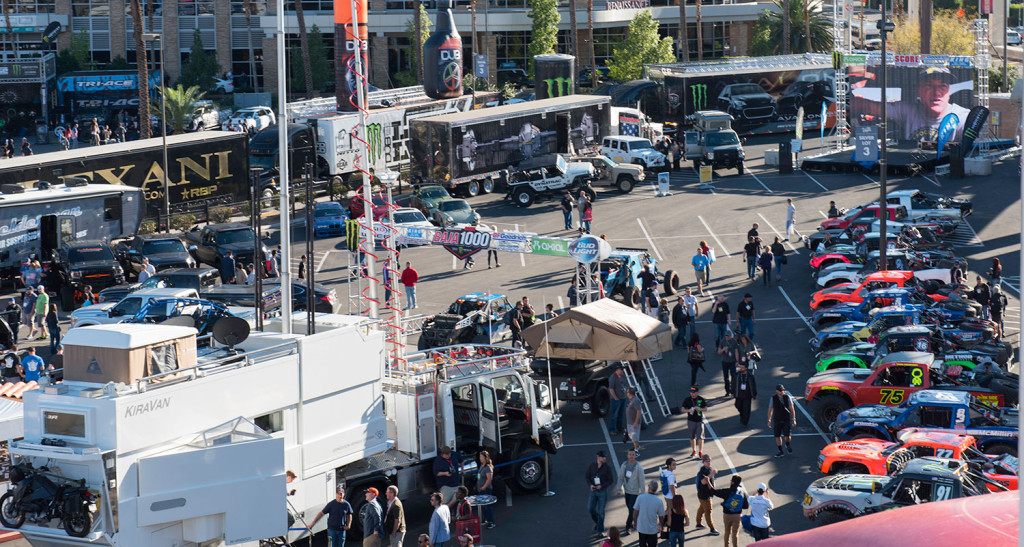 If you’re like most of us who attended the 2015 SEMA Show, you probably spent your first day back at work sorting through emails and catching up on regular business. That’s good, but there are four things that you need to do today to get the most out of your investment of time and money in the SEMA Show that just ended!

You most likely promised or at least offered to provide some info, pricing, photos or proposals to a few people during the S Read More 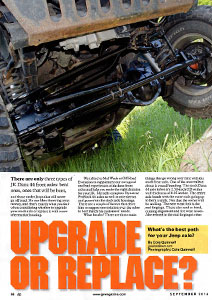 There are only three types of JK Dana 44 front axles: bent ones, ones that will be bent and those under Jeeps that will never go off road. No one likes throwing away money. And that’s exactly what you fear when considering whether to upgrade your stock axle or replace it with a new aftermarket housing. We talked to Mel Wade at Off Road Evolution to supplement our own good and bad experiences with these front axles and help you make the right decision for your JK. Mel sells complete Dynatrac ProRock44 axles as well as axle sleeves and gusset kits for stock axle housings. There are couple of factors that drive him to suggest one solution over the other to best match his customers’ needs. 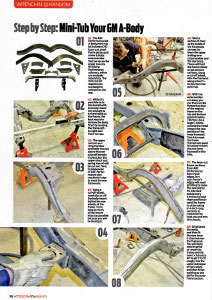 Want a little more tire under your Chevelle (or fill in the name of your favorite GM A-Body)? Whether you’re building a corner-carver, drag race car, daily driver or a cross-county cruiser, or a car that does all of this, having a couple more inches of rear tire width can make a huge improvement in traction. It also makes a huge visual statement. We’re going to walk you through what’s involved in mini tubbing a ’64-’72 GM A-Body using a kit from ABC Performance. 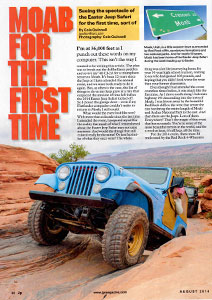 I’m at 36,000 feet as I punch out these words on my computer. This isn’t the way I wanted to be writing this article. The plan was to break out the defibrillator paddles and revive my ’46 CJ-2A for a triumphant return to Moab. It’s been 12 years since the Jeep or I have attended the annual event, and we were both ready to do it again. But, as often is the case, the list of things to do on my Jeep grew at a rate that outpaced the amount of time left before 2014 Easter Jeep Safari kicked off. So I closed the garage door – even if my Flatfender compadre couldn’t make its return to Moab, I still could. 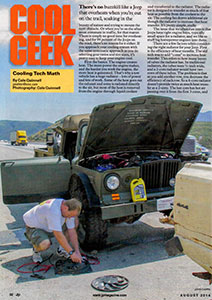 There’s no buzzkill like a Jeep that overheats when you’re out on the trail, soaking in the beauty of nature and trying to mount the next obstacle. Or when you’re on the afternoon commute in traffic, for that matter. There is simply no good time for overheating. And for 99 percent of the Jeeps on the road, there’s no reason for it either. If you approach your cooling system with the same systematic approach as you do selecting gear ratios and tire size, it’s pretty easy to keep your engine cool. 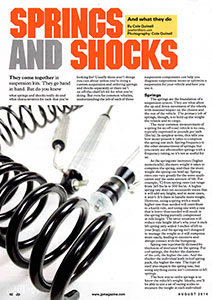 They come together in suspension kits. They go hand-in-hand. But do you know what springs and shocks really do, and what characteristics for each that you’re looking for? Usually these aren’t things you care about unless you’re doing a custom suspension and ordering springs and shocks separately, or there isn’t an off-the-shelf lift kit for what you’re doing. But even for common vehicles, understanding the job of each of these suspension components can help you diagnose suspensions issues or optimize a suspension for your vehicle and how you use it. Read more on fourwheeler.com. 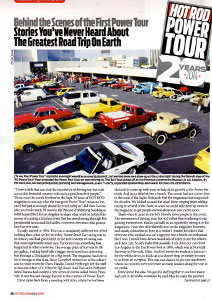 “There is little that can rival the experience of driving our hot rod across this beautiful country with such a great bunch of people.” Those were the words I printed in the September 1995 issue of HOT ROD magazine to sum up what the inaugural Power Tour meant to me, and I feel just as strongly about the event today as I did then. Let me take you back nearly 20 years ago to the Petersen Publishing building at 8490 Sunset Blvd in Los Angeles to share what went on behind the scenes of creating this timeless event that has stood strong through five presidential terms and the hardest economic downturn this generation has ever seen. 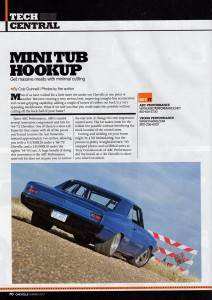 Most of us have wished for a little more tire under our Chevelle at one point or another. Between creating a very serious look, improving straight-line acceleration and improving corner-gripping capability, adding a couple of inches of rubber outback is a very appealing modification. What if we told you that you could make this possible without cutting off the back half of your frame? Enter ABC Performance. This company has created several innovative components and kits for ’64-’72 Chevelles. One of them is a Mini Tub Frame Kit that comes with all of the pieces you’ll need to move the rear framerails in board approximately 2 inches, allowing you to fit a 315/30ZR18 under a ‘66-‘72 Chevelle, and a 335/30ZR18 under the tighter ’64-’65 cars. 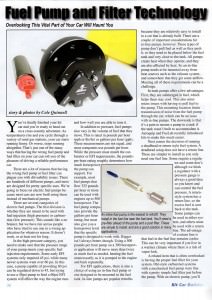 You’ve finally finished your kit car and you’re ready to head out on an cross-country adventure. As temperatures rise and you cycle through a variety of rural gas stations, your car starts running funny. Or worse, stops running altogether. That’s just one of the many ways that having the wrong fuel pump and fuel filter on your kit car can rob you of the pleasure of driving a reliable performance car.

There are a lot of reasons that having the wrong fuel pump or fuel filter can plague you with driveability issues. There are hundreds of different pumps, and most are designed for pretty specific uses. We’re going to focus on electric fuel pumps because most cars are now built using these instead of mechanical pumps. 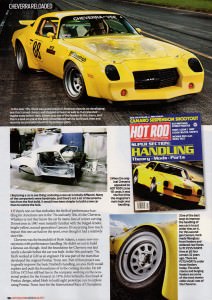 If there’s one car that embodied the birth of performance handling for American cars in the ‘70s and early ‘80s, it was Cheverra. Whether people know the car by name or not, any fans of Detroit iron that could turn corners during this era was familiar with the bulged-fender, bright yellow second-generation Camaro. What’s surprising is the impact that this one car had on the sport even though it had a relatively short life.

Cheverra was the brain child of Herb Adams – a name that is now synonymous with performance handling. He didn’t set out to build a famous car, though. And the foundation for Chevrra was laid nearly a decade before the car was built.